Home About us Management

All of the managers of the St Andrews Foundation serve on a voluntary basis and don’t receive any remuneration or benefits in kind from the Foundation.

The members of the Supervisory Board are:

The members of the Management Board are:

We are currently assisted by fellow Scots:

who are not currently members of the Management Board.

We are supported by the following honorary advisers:

More information about the members of the team 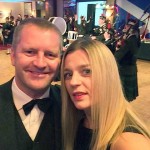 Ben & Magda at the Caledonian Ball

Ben came to Poland in October 1997, but has recently relocated to Amsterdam with his Polish wife Magda, and two sons, Samuel & Dylan. Ben is an active member of the real estate community in CEE and currently is the European President of Prologis.

Ben & Magda have been regular attendees at the Caledonian Ball (with the exception of the 3 years they lived in Prague) and this is one of the few events where Ben actually ventures onto the dance floor.

Although now based in Amsterdam, Ben nevertheless remains a regular attendee at the St Andrew’s Caledonian Charity Ball. 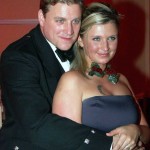 Iain and Alex at the 2005 Caledonian Ball

Originally from Airdrie in North Lanarkshire, Iain came to Poland in 2002 where he was to spend two years managing the construction of Złote Tarasy, a mixed-use real estate development. However, he met his wonderful wife Alex, and Warsaw is now home with their son Nicky and daughter Gabi.

Iain has had a lot of fun at Caledonian Balls since 2003 and especially enjoys the ceilidh dancing. Having met the Częstochowa Pipes and Drums at the filming of a Polish television show, Mamy Cię, Iain introduced them to Martyn O’Reilly and the Caledonian Ball.

With the assistance of Martyn, Iain surprised Alex with a marriage proposal at the 2005 Caledonian Ball. Alex thought she had a winning Lottery Ticket but instead she got Iain! At the 2006 Ball they were delighted to announce Alex’s pregnancy with Gabriella.

Iain told us “I am excited to be able to be part of the organisation of the St. Andrews Foundation and the Caledonian St. Andrew’s Ball and I am busily working out new ideas to make the Ball interesting and fun for our guests and allow us to raise money to be able to support our charities”. 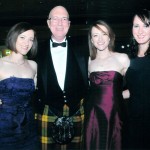 Sandy with daughters Lindsay, Katharine and Vanessa at the Ball in 2011

Sandy, who lives in Warsaw, has taken a table at every Caledonian Ball since 1998!  The Ball has become a major event in the social life of the McMillan family with Sandy’s three daughters, their partners and children regularly travelling from UK to enjoy the best of ceilidhs in Warsaw.

Sandy, who is originally from the West of Scotland, said that the Caledonian Ball reminds him of “his (misspent) youth taking part in many lively village hall dances in Tayinloan and Carradale in Kintyre”.

He is now semi-retired, but continues his interest in real estate and construction through his business Development-Managers.com.

Sandy is responsible for our accounting and financial reporting (with the assistance of Vistra), Internet activities and publicity.

Originally from Auchterarder in Perthshire, Mark learned his skills as a chef at London’s Sheraton Park Lane and Dorchester Hotels. While holding the position of Head Chef at Sopwell House Hotel in St Albans, Mark met his wonderful wife Anna.  They were soon to be blessed with a son, Casper, who speaks fluent Polish and English, with a little bit of Scottish!

Mark came to Poland with Anna and Casper in 2015 to take the post of Executive Sous Chef at Warsaw’s Hotel Intercontinental and was subsequently invited to join the World’s Chef Association in Poland (OSSKIC). He has had the privilege of cooking for some great people over the years such as the late Nelson Mandella, the Brazilian and Scottish national football teams, Arsenal football club, and many other celebrities.

While in Poland, Mark and Anna have been blessed with two further children, Lena and Kajetan. Mark said that “I am very proud to be able to part of such a great charity which is very close to my heart after experiencing two very complicated births of my children in polish hospitals”.

Dentons is a global law firm with 3,000 lawyers and professionals in more than 80 locations spanning 50-plus countries across Africa, Asia Pacific, Canada, Central Asia, Europe, the Middle East, Russia, CIS and the Caucasus, the UK, and the US, all of whom are committed to challenging the status quo to offer creative business and legal solutions.

Do NOT follow this link or you will be banned from the site!
We use cookies to ensure that we give you the best experience on our website. If you continue to use this site we will assume that you are happy with it.OkPrivacy Policy